Have you been having problems with the touch screen on your Samsung smartphone? Looking for a quick way to check for dead spots, or verify that some areas of the screen are truly unresponsive? Here is a cool trick that should allow you to check your entire touch screen in a matter of seconds.

Before we begin, the screenshots in this tutorial are taken using a Samsung Galaxy S4 operating on Android 4.2 Jelly Bean. While the steps in this article should be pretty similar on any smartphone running on the Android operating system and produced by Samsung, the steps involved on your specific cell phone might differ slightly or may not be available depending on the circumstances.

For this tutorial we will be accessing the device diagnostic tool that usually comes preinstalled on android smartphones using a special Star Code. While I have noticed that many Star Codes are becoming less and less available on Android smartphones this diagnostic tool is still commonly available and can be an amazingly useful tool when diagnosing parts and features of an Android cell phone.

Using a star code command is pretty straightforward and pretty simple. What you need to do is open the dial pad on your cell phone, type in the specific star code of the command you are trying to execute and once you’re done typing the star code it should be recognized and carried out (on some phones you may have to click the call or dial option for the command to be recognized).

So let me show you what I mean and then we will proceed with checking the touch screen on your Samsung cell phone.

Testing the Touch Screen with the Device Diagnostic Tool

Like I mentioned earlier, the Star Code command that you use will depend on the make and model of your cell phone and may also depend on the version of Android that it is currently operating on. Since this is a Samsung the (Samsung Galaxy S4 to be specific) the Star Code that we’ll need to use to access the Device Diagnostic tool is going to be*#7353#.

From your phones main screen tap on the Phone icon as if you were going to make a call. 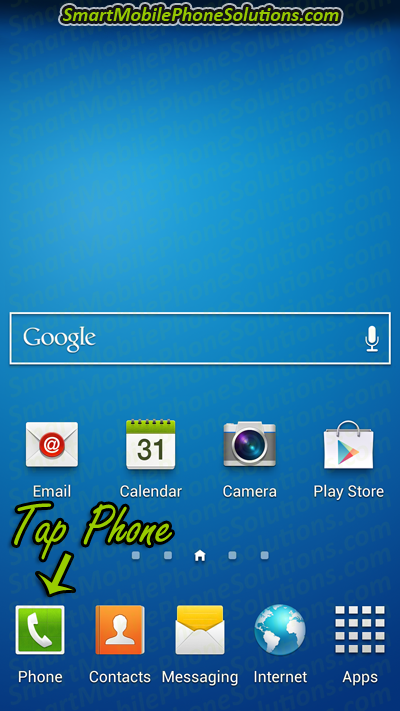 Make sure that the Keypad is selected as if you were about to type in a telephone number.

Then type in the star code command that you wish to use. In this case you would type in *#7353#. 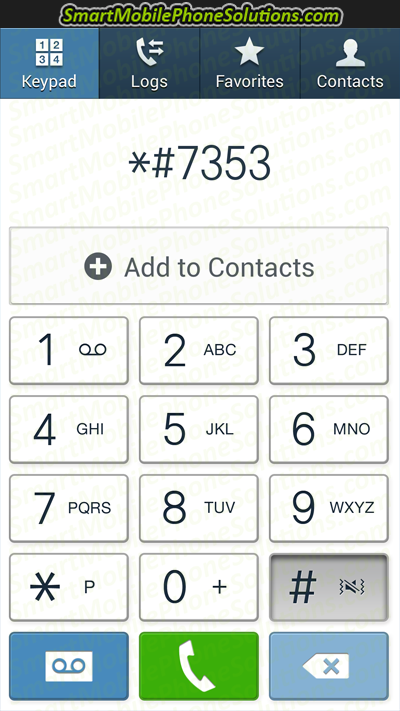 On the Samsung Galaxy S4 as soon as you type in the last character in the command (in this case “#”) the code should automatically register and the phone should carry out the command. In this case your Samsung’s diagnostic tool should open. 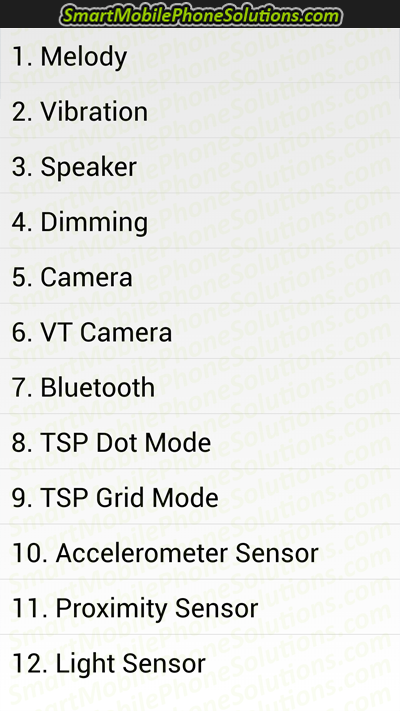 The Device Diagnostics tool can be used to check many things on your Samsung cell phone but since we need to check the touch screen we are going to look for an option that will allow us to do that.

On the Samsung Galaxy S4 there are two options available which allow us to test the touch on our Android device. Those two options are TSP Dot Mode and TSP Grid Mode. 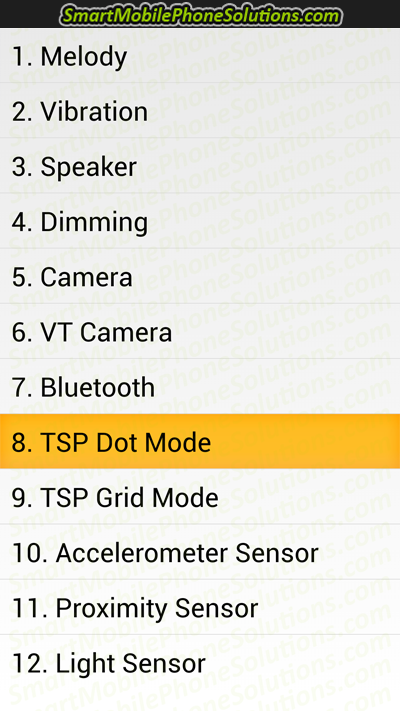 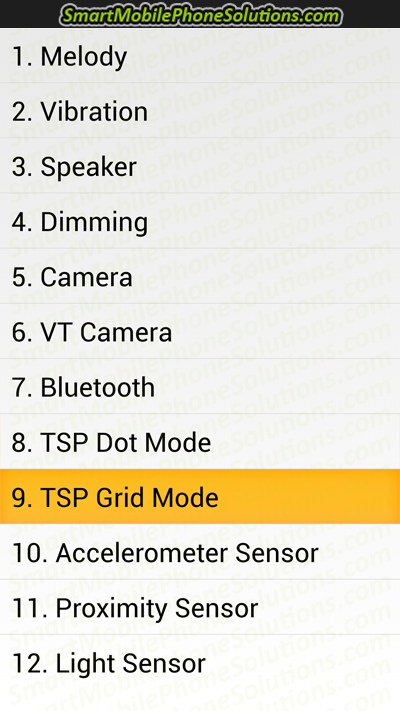 TSP Dot Mode will put a small mark anywhere that you press on the touch screen to indicate which parts of the screen have been pressed. In this case “x” marks the spot, and can be a little difficult to see at first as it is a rather tiny “x” or dot. 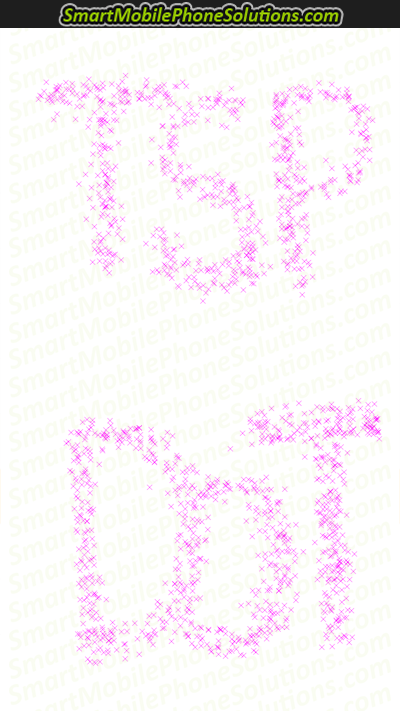 The TSP Grid Mode creates a grid overlay on your cell phones display screen and allows you to test each section of your touch screen individually to verify whether it is working properly or not. This is my favorite method of the two as you can quickly drag your finger across the entire screen to see exactly where you have pressed and whether there are any dead spots or parts of the screen that are responding incorrectly. 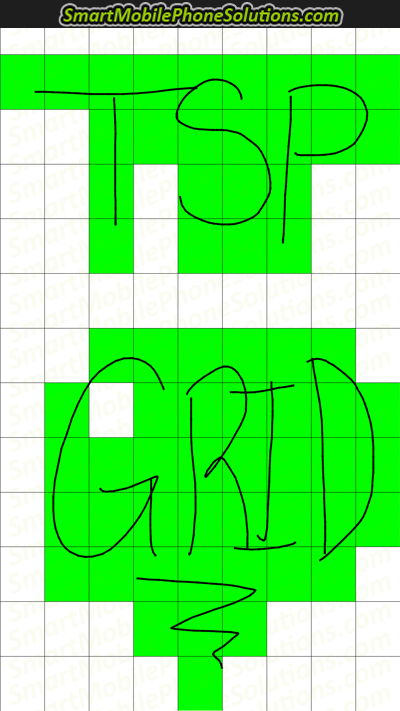 And that’s all there is to it!

Congratulations you now know how to test the touch screen on your Samsung smartphone.

How to fix a malfunctioning touch screen – Software vs. Hardware

If you run the test and there are no signs of unresponsiveness but your phone still seems to respond incorrectly when outside of the diagnostics tool then it could be a software problem on the device and the good news is that you should be able to fix the problem yourself with minimal fuss.

If the touch screen diagnostic test fails and there are noticeable spots or areas of the screen that are unresponsive then there might be problem with the touch screen itself and it might need to be replaced in order to resolve the problem.

If you are experiencing problems with your phones touch screen and are looking for some advice or suggestions on how you could try to resolve those problems then I suggest reviewing How to fix the touch screen on an Android cell phone as I think it’s exactly what you are looking for.

If you did find the advice on this tutorial helpful, instructive, or informative then don’t hesitate to let me know that you liked it by pressing the Facebook like button and Google + button below or by simply leaving a friendly remark in the comment section underneath this article. Remember that you can also bookmark this page if you think that you might forget the star code command used to access the device diagnostics tool on your Android, that way you can come back to the site quickly should you ever need to.

Thanks again for reading this tutorial and visiting the site.

I hope you have a wonderful day.